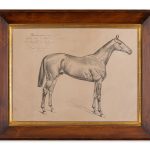 Ambush II and Persimmon – Property of His Majesty the King (1902)

Pair of pencil drawings; both signed, dated and inscribed by the artist
Newly-framed as pictured

Basil Nightingale was a celebrated and charismatic English sporting artist of the late-Victorian and Edwardian era. The son of the renowned painter Robert Nightingale RA, he was born in Maldon, Essex where under the tutelage of his father he showed a prodigious talent from an early age. Working in oils, watercolour and pastels, his expertise as an anatomist as well as a practical horseman and houndsman, underpinned the quality of his work. He was a favourite amongst the aristocracy, many of whose prize horses he was commissioned to paint (at Lowther Castle, ancestral home of  ‘The Yellow Earl of Lonsdale’  there was an entire gallery, the ‘Nightingale Room’, lined with oils, watercolours and sketches) and he painted a large number of racing and hunting scenes for Edward VII. He lived a colourful and (perhaps necessarily) peripatetic life. Moving from Somerset to Melton Mowbray to no fewer than 6 addresses in Leamington Spa, Nightingale repeatedly found himself in court for a myriad of offences from defaulted debts and assault to failure to produce a dog licence for his personal pack of hounds and omitting to send his children to school. He was a billiards player of international standard, held the record for jumping the railway track while hunting with the Quorn and claimed to have invented sixteen years previously what the Germans were advertising in 1915 as a completely new bullet-proof shield. He died in Banbury in January 1940.

This pair of pencil drawings depict King Edward VII’s two most prized horses – Ambush II (Winner of the Grand National 1902) and Persimmon (Winner of the Derby and the St.Leger 1902).

Basil Nightingale’s work has been offered at auction multiple times, the record price for this artist at auction being 26,936 USD for Breaking Cover sold at Christie’s South Kensington in 2013.