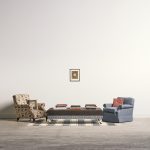 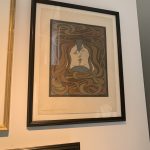 The main sheet of Behrens. One of the 38 artist’s copies on Japan. From: Pan IV. Year, Issue 2, with the typographic designation.

Peter Behrens was a German architect and designer. He was central to the modernist movement and several of the movement’s leading names (including Ludwig Mies Van der Rohe, Le Corbusier and Walter Gropius) worked for him in the earlier stages of their careers. He is noted for his influential role in the development of modern architecture in Germany. In addition, he was a pioneer in the field of industrial Design. The kiss is the most iconic image of Jugendstil, the German counterpart of Art Nouveau. This all-embracing style took its name from the magazine Jugend, founded in Munich in 1896, which espoused the new movement. In Berlin at the same time, the literary-artistic journal Pan was equally instrumental in promoting the Jugendstil aesthetic, and it was inside the magazine’s pages (vol iv, no 2, 1898) that this quintessential colour woodcut first appeared.

Much favoured by the Symbolists, the theme of kissing lovers (of frequently ambiguous gender) was also famously treated by Edvard Munch and Gustav Klimt, to name but two succeeding examples. Behrens made this print during his early and most committed adherence to Jugendstil when he was set on becoming a painter and graphic artist.