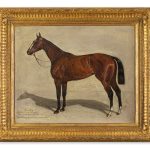 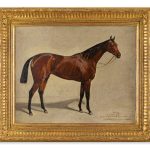 Pair of Oils on Panel; both signed and inscribed
Newly-framed as pictured

From a painting family of amazing depth (father, grandfather, three uncles, and a son), Emil Adam became was one the master equestrian artists of his age. The son of animal painter Benno Adam (1812-1892), he learned to paint in the family studios studying under the guidance of his uncle, the famous battle painter Franz Adam (1815-1886), and later under Jean Francois Portaels in Brussels. After a study of veterinary medicine (like Stubbs his work was greatly informed by an in-depth knowledge of a horse’s anatomy), he attracted a flow of commissions from European and British nobility. He painted the finest racehorses of Europe, and his accuracy and artistic precision were of the highest order. Mons Meg is inscribed bottom left: “Mons Meg. By Martini Henry – Malagga. Winner of the Ascot Gold Vase. Emil Adam. 1891. Newmarket.”Melody is inscribed bottom right: Melody. By Tynddal-Glee. Winner of the Prince of Wales Stakes at Ascot. Emil Adam. Nov 1891. Newmarket.Emil Adam’s work has been offered at auction multiple times, the record price being $28,750 USD for Rock Sand with Jockey Up sold at The Sporting Art Auction in 2019.