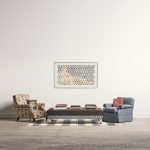 Silkscreen of La Grande Odalisque by Ingres*, cut in the form of tulips and pasted on paper, signed lower left
Newly-framed in polished aluminium as pictured

*La Grande Odalisque, also known as Une Odalisque, is an oil painting of 1814 by Jean Auguste Dominique Ingres (1780-1867) depicting an odalisque, or concubine. Ingres’ contemporaries considered the work to signify Ingres’ break from Neoclassicism, indicating a shift toward exotic Romanticism. La Grande Odalisque attracted wide criticism when it was first shown. It is renowned for the elongated proportions and lack of anatomical realism. The work is owned by the Louvre which purchased the work in 1899.

The English and French term odalisque (rarely odalique) derives from the Turkish ‘oda’, meaning “chamber”; thus an odalisque originally meant a chamber girl or attendant. In western usage, the term has come to refer specifically to the harem concubine. By the eighteenth century the term odalisque referred to the eroticized artistic genre in which a nominally eastern woman lies on her side on display for the spectator.