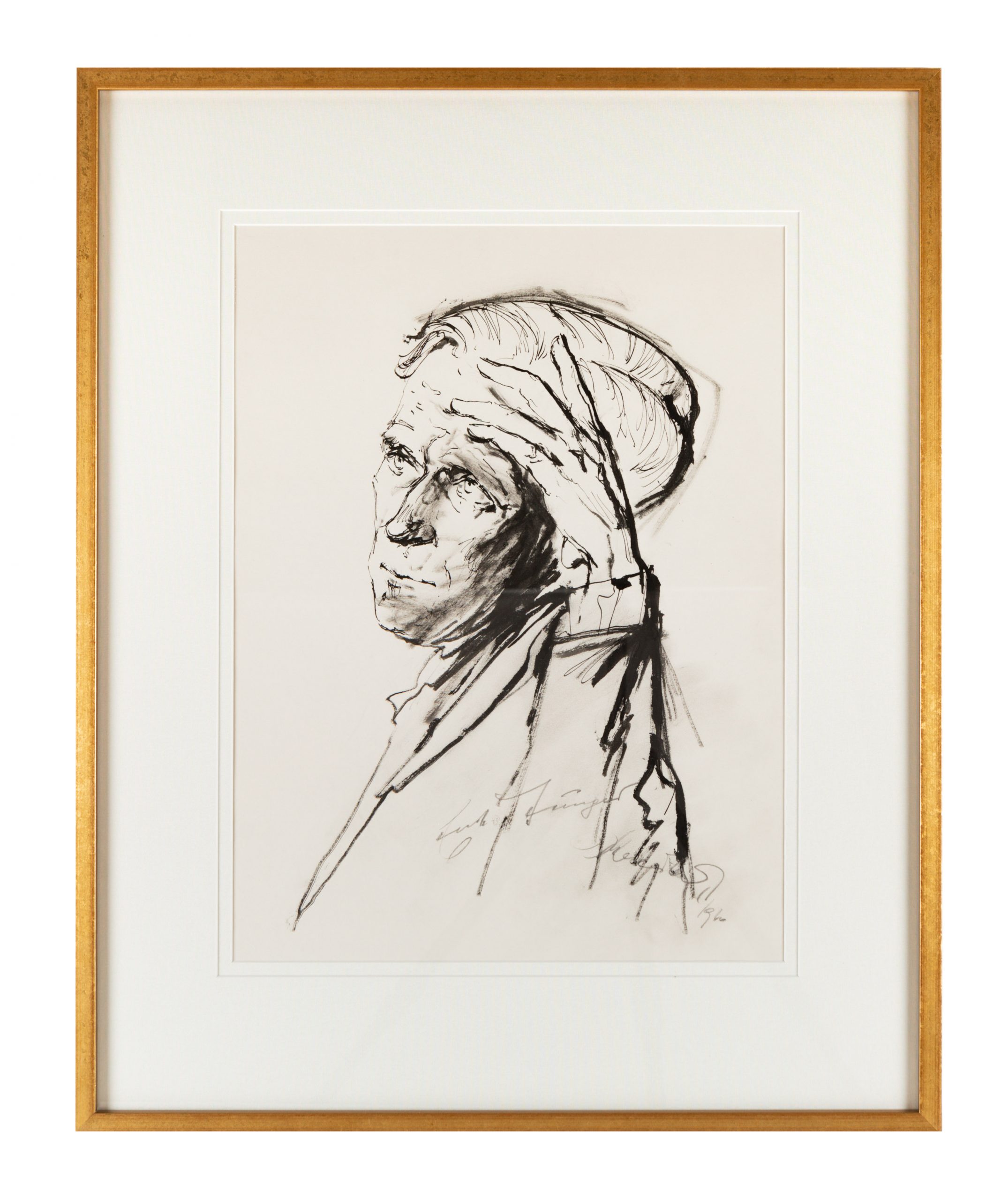 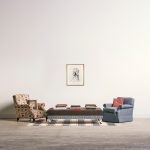 Ink on Paper
Newly-framed in gold leaf box as pictured

Ink on paper.
Signed and dated lower right by both the artist and (a great rarity) Jünger himself.

Czech-born Oskar Kreibich was one of Europe’s pre-eminent post-war portraitists. Having begun his artistic training at the Academy of Fine Arts in Prague (where he was one of Heinrich Hönich’s students for five years), Kreibich spent a year’s master class with Hans Meid at the Prussian Academy of the Arts in Berlin. He worked at the Villa Massimo in Rome from 1941 to 1942 where he was Villa Romana laureate in 1942. Later that year he was taken prisoner by the Soviets. Released from a gruelling captivity, he settled in the town of Backnang south of Stuttgart in 1946. There, he once again begun to draw and paint, soon becoming famous throughout the continent for his portrait work, characterised by a commitment and ability to adapt his style to the personality and sense of each individual sitter. These included the most luminous cultural figures of the German post-war period including Theodor Heuss, Hermann Hesse, Günter Grass, Max Brod and Max Born. As well as the artist’s, highly unusually this picture also bears the signature of Junger himself as a sign of their fraternity of experience in war.

Ernst Jünger, German military hero, diarist, essayist and novelist, was one of the towering cultural figures of 20th century Europe. He was two years short of consciously living throughout its whole duration.

Having joined the Foreign Legion Legion in 1913, Jünger volunteered for the German Army at the outbreak of World War I and served as an officer on the Western Front throughout the conflict. As a soldier Jünger was conspicuous for his bravery: he was wounded at least seven times, and in 1918 he was awarded the Pour le Mérite medal, Germany’s highest military decoration. After the war he published in Stahlgewittern (1920; The Storm of Steel), a novel in the form of a diary and the most influential war memoir of the century. Discharged from the army in 1923, Jünger studied zoology and botany at the Universities of Leipzig and Naples, before publishing further recollections and reflections on his war experiences in Das Wäldchen (1925; “The Grove”) and Feuer und Blut (1925; “Fire and Blood”). Despite his militarism, his preference for authoritarian government, and his radical nationalist ideals, Jünger resisted Adolf Hitler’s offers of friendship in the late 1920s and declined to join the Nazi movement even after it came to power in Germany in 1933. Indeed, during Hitler’s chancellorship, he wrote a daring allegory on the barbarian devastation of a peaceful land in the novel Auf den Marmorklippen (1939; “On the Marble Cliffs”), which, surprisingly, passed the censors and was published in Germany. Jünger served as an army staff officer in Paris during World War II, but by 1943 he had turned decisively against Nazi totalitarianism and its goal of world conquest, a change manifested in Der Friede (written 1943, pub. 1948; “The Peace”).

Jünger was dismissed from the army in 1944 after he was indirectly implicated with fellow officers who had plotted to kill Hitler. A few months later, his son died in combat in Italy after having been sentenced to a penal battalion for political reasons. Jünger’s postwar novels include Heliopolis (1949) and Gläserne Bienen (1957; “The Glass Bees”), a disturbing story of a jobless former soldier in an overmechanized world symbolized by artificial bees and marionettes. After 1950 Jünger lived in self-imposed isolation in West Germany while continuing to publish brooding, introspective novels and essays on various topics. In such later books as Aladdin’s Problem (1983), he tended to condemn the militaristic attitudes that had led to Germany’s disastrous participation in the World Wars. Jünger’s Sämtliche Werke (“Complete Works”) were published in 18 volumes from 1978 to 1983.