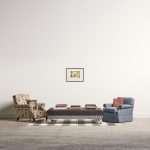 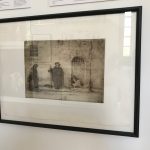 Ricardo Baroja y Nessi was s Spanish painter, writer and engraver. As an engraver, he is considered the successor of Francisco Goya.

In 1926, his good friend Valle-Inclán wrote in the prologue for Ricardo’s new book, El Pedigree, remarking on the merit of his companion:

Ricardo Baroja is loved by the Muses. Not one of the nine sisters has denied him her gift. Had he pursued the graphic arts, he would have outdone the best. I imagine him in an Italian city, a painter in the days of the Renaissance. That rare ability to conceive and to execute quickly makes him brilliantly capable of doing grand mural works. What paradoxical humour he would have shown in training his disciples from the scaffolding, in welcoming rulers, in having discussions with cardinals! Verbal grace, frank humour, pleasant laughter, paradoxical flights are also distinctive in Ricardo Baroja – beloved of the Muses – who, eschewing romantic sputterings, heads toward old age.